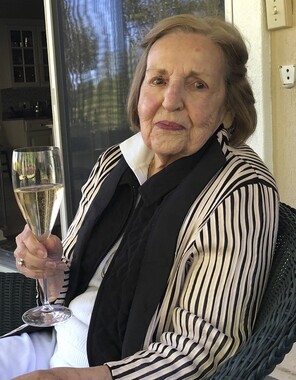 Back to Betty's story

Betty Ross Lowell, 95, of Ashland peacefully passed away Monday, September 9, 2019 at her residence surrounded by those who loved her.
Betty was born January 31, 1924, in Catlettsburg, Ky., a daughter of the late George Washington and Marguerite Hensley Ross.
In addition to her parents she was also preceded in death by her Husband Frank Lowell in 2009; brothers Jack Ross, Rupert Ross, Bill Ross, Merrill Ross; and sisters Bonnie McLeod and Martha Frances Kahne.
Betty graduated from Boyd County High School. She moved to Norfolk, Va. with her sister Bonnie during World War II and served with the United States Navy in Civil Service as a budget Officer and Comptroller. She returned to Ashland with her husband Frank in 2004 to enjoy retirement.
Those left to cherish her memory include her nieces and nephews, Lynn Ross of Bluffton, S.C., Paulette Ross of Apopka, Fla., Greg Ross (Tish) of Ashland, Roger Ross (Becky) of Ashland, Frank Ross (Queta) of Ashland, Steve Ross (Pam) of Ashland, Bonnie Jean Ross of Ashland, Melinda Ross Rahal (Nick) of Beckley, W.Va., Vince Kahne (Sherry) of Paducah, Ky., Harry Kahne (Sandy), of Louisville, Ky., Rebekah Kahne Salyer of Ashland, Danny Ross McLeod of Dallas, Texas, Larry McLeod (Jill) of Alexandria, Va., Billy McLeod (Christina) Denver, Colo.; and a host of extended family and friends.
No services are planned. Betty's wish was to be buried next to her late husband in the Elmwood Cemetery in Norfolk, Virginia.
Steen Funeral Home, Central Avenue Chapel, has been entrusted with arrangements.
In lieu of flowers, please consider a donation in Betty's memory to Community Hospice, 1480 Carter Avenue, Ashland, KY 41101.
To share a memory of Betty or to leave a condolence to the family please visit steenfuneralhome.com
Published on September 10, 2019
To plant a tree in memory of Betty Ross Lowell, please visit Tribute Store.

Plant a tree in memory
of Betty

Restore the guestbook to view the 1 more posts by family and friends, and share a memory or message of condolence of your own.