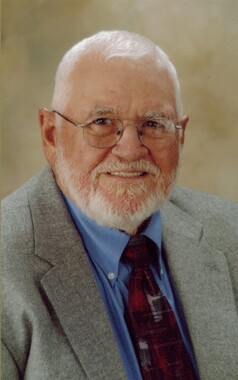 Back to Daniel's story

Daniel Vinson McGlothlin, 82, of Ewing, widower of Mary Kathryn McGlothlin, passed away on Tuesday, January 21, 2020, at the St. Joseph Hospice Care Center in Lexington.
He was born on April 20, 1937, in Ashland, Ky., a son of the late Roy V. and Laura Steele McGlothlin.
Upon high school graduation, Dan attended the University of Kentucky. He was a retired dairyman and served on several local and state agricultural boards. He was an avid supporter of 4-H and was the Recipient of the 1987 Ag Leader of the Year award presented by the Fleming County Chamber of Commerce. Dan and his late wife, Mary Kathryn, attended the Mt. Pisgah Baptist Church in Fairview.
He is survived by a son, David (Bobbi Jo) McGlothlin of Richmond; a daughter, Amy McGlothlin (Lisa Herman) of Ewing; two grandsons, Cody and Kyle McGlothlin, both of Richmond; and a brother, Robert Steele (Betty) McGlothlin of Versailles, Ky.
A graveside service will be held 1 p.m. Saturday, January 25, 2020, at the Ross Cemetery in Boyd County, Ky. with Graveside Military Funeral Honors performed by the American Legion Post 93 - Kenova, W.Va.
Visitation will be 5 to 8 p.m. Friday, January 24, 2020, and 7 to 9 a.m. Saturday, January 25, at the Carpenter-Fritz & Vice Funeral Home in Flemingsburg. In lieu of flowers, memorials are suggested to the Mt. Pisgah Baptist Church, 6184 Ewing Rd., Ewing, KY 41039 or the East Fork Methodist Church, 20100 State Route 3, Rush, KY 41168. Condolences may be made on line at carpenterfritzvicefh.com
Published on January 23, 2020
To plant a tree in memory of Daniel Vinson McGlothlin, please visit Tribute Store.

Plant a tree in memory
of Daniel

A place to share condolences and memories.
The guestbook expires on April 22, 2020.

Your Light Shines was purchased for the family of Daniel Vinson McGlothlin by phillip fultz.  Send flowers