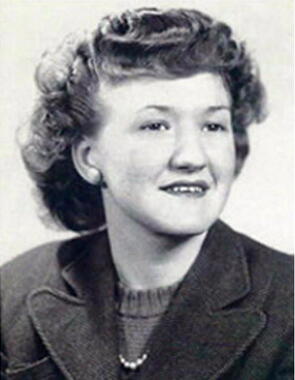 Back to Dottie A.'s story

Dottie A. George May, age 95, of Denver, Indiana passed away on September 9, 2019.
She was born on February 12, 1924 to James S. and Adeline J. (Conley) George at Little Paint Creek, Kentucky near Prestonsburg. She had 9 siblings, brothers, Marcus, Marvin and Orville; and sisters, Carma Litz, Myrtle Emrich, Vada Glancy, Irene Rice, Geneva(deceased at age 6) and Alta (deceased at birth). Dottie was the last survivor of all the children.
At the age of six, she survived the diphtheria epidemic of 1930 by taking a serum that would either kill or cure her. In school she was a bright student and skipped two grades. As a teenager she loved to play softball and basketball. Till the end she was an avid sports fan. Her favorite teams to watch were the Indianapolis Colts and the Kentucky Wildcats.
After high school, she had various food service jobs and attended vocational school where she achieved the highest grades in her class. During World War II, she worked at Wright Patterson Air Force Base building and repairing the B29 aircrafts. She also worked for the Navy in West Virginia and made munitions for the military in Ashland, Ky.
Her family had settled in Ashland where Dottie attended and obtained her certification from beauty school. She married William J. May of Pikeville, Ky. on August 9,1947. He was a Navy veteran who served in the South Pacific during the war and later worked for the C&O railroad. William preceded Dottie in death on the night of his birthday, September 29, 1973.
Dottie and William had five children. One stillborn son, three surviving daughters, Patricia Durham of Mexico, Ind.; Valerie May of Bunker Hill, Ind.; and Geneva (Jodie) Shives of Denver, Ind.; and son Jeffrey May (deceased). Also surviving are one grandson Christopher Hughes, Peru, Ind.; and two great-grandchildren, Liliana and Tyler Hughes.
Dottie was a devoted wife and mother who loved working in the garden, doing yardwork, and especially tending her flower beds. She would rather be outside working than inside. She was fond of birds and especially hummingbirds. She kept a feeder outside her kitchen window so she could watch them.
Dottie was a devout and faithful Christian. She loved the Lord and in her final days she would say she "was waiting on Jesus to come for her". She was baptized at the Denver Baptist Church on February 16, 1969, and was member of that church.
Arrangements have been entrusted to McClain Funeral Home, Denver, Indiana.
Funeral Services will be held at 1 p.m. Friday, September 13, 2019, at Caniff Funeral Home, Ashland, Ky. Visitation will be one hour prior to the service.
Dottie will be buried in the Dixon Cemetery beside her son Jeffrey and among her parents and family.
Condolences may be sent online at mcclainfh.com, or canifffuneralhome.com.
Published on September 10, 2019
To plant a tree in memory of Dottie A. May, please visit Tribute Store.

Plant a tree in memory
of Dottie A.