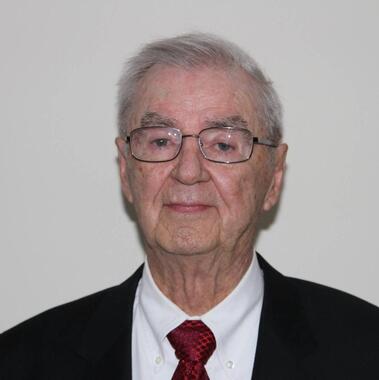 Back to Ova's story

Ova Kimbleton was born on May 6, 1924, in Johnson County, Ky., and passed away on Tuesday December 10, 2019, after a brief illness.
He was predeceased by his wife of 68 years, Minnie Kimbleton. He is predeceased by his parents, Margaret and James Kimbleton, and his siblings James Kimbleton, Kern Kimbleton, Cecil Kimbleton, Ora Kimbleton Boleyn, Corvin Kimbleton, Effalee Kimbleton, and Junior Blevins.
He is survived by his daughter Melissa Cathers and a special son-in-law, David Cathers; grandchildren Michael Boggs (Christy), J. Matthew Boggs (Megan), and Ashley Jackson (Craig). He has seven great grandchildren, Abby, Andrew and Avery Boggs, Peyton Boggs, and Nola, Allman, and Wakely Jackson.
Growing up in Bent Branch, Kentucky, Ova played basketball throughout school, and was invited by Adolph Rupp to play at the University of Kentucky. He entered the Air Force after high school, and continued his education after high school, earning his accounting degree from Bowling Green Business College (which merged with Western Kentucky University). He married Minnie in June of 1951 and they made their home in Ashland. He had licensure as a Certified Public Accountant and worked in his firm for many years in public accounting. He had a strong work ethic, which he passed along to the family by example. Each child and grandchild had the opportunity to work with "Poppy" at some time, and he taught them business basics.
Ova was an avid Kentucky basketball fan and loved cheering on the "Cats". He was active in many community organizations, serving as the President of the Downtown Lions Club, treasurer and board member of the Billy Ray Cyrus Foundation and the Sounds of Christmas Children's Charities, Boyd County Library Board of Trustees, Board Member for "The Neighborhood", served on the board of Ashland Area Presbyterian Ministries and was President of the Ohio Valley Accountants Association. He was an avid golfer, and played competitively, winning his last season in 2017 playing on his league "The Bugs" at Bellefonte Country Club where he and Minnie have been members since 1978. In later years, his goal to was score less than his age.
He was a strong proponent of community involvement, and he and Minnie were regular volunteers together at "Fresh Start" at the Neighborhood and participated in gift wrapping each Christmas for the Giving Tree.
He was a member of Normal Presbyterian Church since 1965, serving as an elder, as church treasurer, moderator at the Session for 8 years, teaching Sunday School, and singing in the choir. He was a 32nd degree Mason, a member of the Scottish Rite, and a member of the El Hasa Shrine.
Ova and Minnie were longtime members of the Continental Dance club, where they learned many types of ballroom dances. They loved to dance together, whether at a formal dance or dancing at home to reruns of "Lawrence Welk" every week. They were avid travelers, traveling with friends to many countries and always having the best time. He also enjoyed clogging.
Ova loved his family. And family included both those who were born into the family but also those who joined the family through marriage. Ova was lovingly referred to as "Poppy" by his grandchildren and great-grandchildren. Poppy drove each of his grandchildren to school each morning, until they were old enough to drive themselves. If you ever asked him how he was, he always answered, "great shape" and he always had a kind word for all, recognizing each family member for achievements and being genuinely interested in their jobs and business activities. His favorite game with younger family members was "head bumper-eye winker". He supported his grandchildren and great grandchildren in all their activities from sports to dance to business ventures.
A service celebrating his life will be held Sunday, December 15, at 2 p.m. at Lazear Funeral Home in Ashland. Visitation will be immediately prior to the service from 12:30 to 2 p.m.
Published on December 13, 2019
To plant a tree in memory of Ova Kimbleton, please visit Tribute Store.

Plant a tree in memory
of Ova

A place to share condolences and memories.
The guestbook expires on March 12, 2020.

William Taylor and family,Howard and Kelley
Ova , Minnie and Melissa the Taylors were so blessed too know each of you and live 40years of memories and learn to love the Cats and Heard.Ova you were my best friend,Minnie You were Loved by Jean,2 lefies,and Milissa you lead Howie and Kelley on many Mischievous outings. Melissa we are so sorry for your loss , but remember YOU were their Princess and they were so proud of you and what a wonderful lady ,wife ,mother and grandmother you are.Love from the Taylors.
Becky West

So sorry to hear of Mr. Kimbleton’s passing. He was the very first person I ever worked for when I graduated from High School. His daughter, Melissa, and I graduated together in 1975. He was a fine gentleman and a wonderful mentor. He attended my wedding in 1977. I remember a time in my young married life when a magazine company was giving me a hard time over a subscription of $10. He gave me some wonderful advice which I have applied many times in my life with similar situations! I have never forgotten him and his kindness. May you and Minnie live together forever in Heaven!!